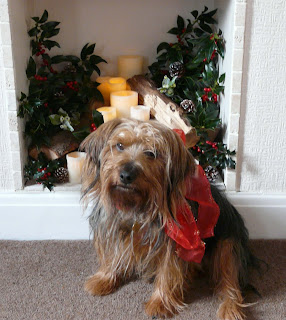 Most people who know me know that I don't really like Christmas for a myriad of reasons, however, this year when I thought it was going to be actually more angst ridden than even normal I think I have found the secret- Just don't think too much or if you do end every sad or sorry thought with a but...
I haven't managed to do anything 'christmassy' to get me in the mood this year for a variety of health and work reasons but I have taken to making sure that when I am out walking I enjoy all the little light displays that people put in their garden and there are some lovely ones out there.
Its been left entirely up to me to do nearly all the Christmas shopping - pressies and food - because everyone else has been too busy at work and as I don't drive this has been no mean feet. Even the wheelie basket gets heavy dragging it up the hill to my house for the umpteenth time. But I now have splendid biceps and I haven't had the other half (the accountant) staring over my shoulder saying things like 'couldn't you get the cheaper one?' (no because that tastes disgusting, will end up getting thrown away not eaten because even the dogs won't eat it and that's saying something as I don't do fussy pets and mine eat anything! and I'd rather eat less and enjoy it)
I'm no domestic goddess . I can pluck and draw a turkey, make all sorts of cakes and puddings and make any preserve you like but I don't enjoy it and the family (all 3 0f them) never notice and I'd rather be sewing. But they will all have all the trimmings (they all want different things including different types of pudding) and its actually cost me less than making it from scratch. More importantly as its all up to me I won't end wanting to stuff an onion up one of them rather than the turkey and even more importantly in today's climate we are lucky enough to have a Christmas dinner.
Although I was feeling a bit down because the daughter will be spending a large part of Christmas with her boyfriend and his family leaving me with the husband and the father-in-law who will probably be asleep by 5pm on Christmas Day , I realised I am lucky to have her with us for Christmas lunch and I shall spend the evening with something good on the telly and at last have time to pick up my much neglected stitching again.
Finally in just over a week it will be January- I love January, a new year, new challenges, time to get off and running again. So to everyone in Blogland have a Happy Christmas whatever you are doing, wherever you are and a joyful new year.
Posted by chrissythreads at 07:15

Happy Christmas Chris. Hope you manage to enjoy it.

Yes at least you will have all your family at the table on Christmas day! Spoke to Rachel via skype as she'll be off camping on a beach on Christmas day. Lucky her! Have a great time whatever you do, see you in the new year..

Christmas can be a difficult time for many of us, and is definitely more fun when one's children are still tiny. Hope you manage to enjoy it and have a very Happy New Year.

Count down to January and happy post Christmas stitching.