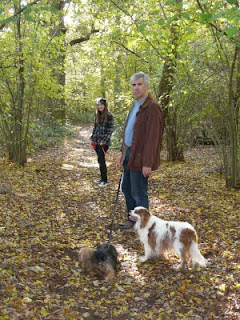 Posted by chrissythreads at 11:36 2 comments: 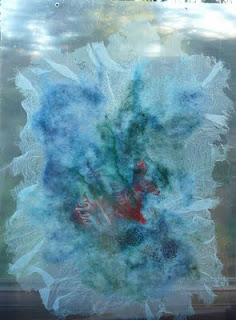 Labels: What lies beneath second site
Its been another of those 'where did the weekend go!' times but it has been quite productive.
I managed to buy a cheap pair of ballet shoes to use in my Fine Art Module, I've tea dyed the silk and printed silk fabric for new linings in all of the shoes and I've even made a start on the embroidered roses for the silk bindings.

On the other module I've finished creating the embellished fabric from wool, silk fibres and plastic for the inner cylinder (The melted plastic went a bit hard which meant I broke 3 needles! not something I do that often but really annoying) so I've just got the 2 outer ones left. I also managed to create the subsidiary sample for the second site piece (sounds complicated doesn't it? - well unfortunately it is).
I've also written two proposals -one for each project- so all is ready for my 2 tutorials this week,gulp!. During all this I had an email from the JCS office asking me if I was OK because they had seen my blog. At least its nice to know they are keeping an eye on us.
On the home front I caught up with the housework and some friends. Walked the dogs (Kirsty came too- she must have been bored) and Martin checked on his mum and dad, things are no better but then they won't be but at least for the time being they are stable.
Finally I started to put togther all of the AQUA-8 girls staements, CVs and images ready to create a pack tobe sent out to galleries.

I think its a good job the clocks did go back this weekend as it gave me a whole extra hour now if I could just conjure up a couple more I might even get the ironing finished.
Posted by chrissythreads at 11:18 1 comment: 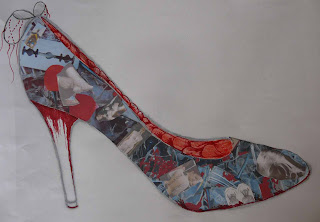 Posted by chrissythreads at 03:52 3 comments:

Labels: A step in the right direction
Hi Folks - I'm back, in more ways than one.
I've finally gotten a bit bolshy and decided that I need to do this course in a way that makes sense to me- and guess what ? that seems to be fine with the powers that be (for the moment anyway). I need to exercise the mantra 'simplify' all round and by doing so the work does appear to be stronger so maybe that is the right direction to go. Anyhow I have the 2 module goals sorted out now plus an idea for my forthcoming dissertation that will feed into my final exhibition in a way that is really ME.So even though I did moan about one of my tutors by being really irritating she has actually set me on the right track.
Thanks to everyone for your supportive comments- I won't give in (with luck).
I also think the fact that my mother-in-law is quite seriously ill does rather reflect on our mood in general at the moment so it is easier to focus what's wrong with the course than that.
I'm now off to source a pattern for some 'golden Lotus Shoes' and a pair of ballet shoes. (don't ask! but hpoefully all will be revealed in time)
Posted by chrissythreads at 03:40 1 comment:

I HATE THIS DEGREE COURSE!!!! ...That feels better.
I must have been totally insane to ever undertake it because it doesn't seem to matter how hard you work ... you're wrong. Whatever your own belief system ... you're wrong and even when you toe the line and do exactly what they tell you and the module says- guess what?... You're wrong. Ahhhh!!!! I feel like I'm getting nowhere, am producing work of no value and most of all they keep pushing me (not in a good way) to do things that just aren't me. If you read the blog 'fan my flame' you can probably tell that its not just me as Gina and I are both doing the same degree course -just at different stages. There is just one good thing - I've only got 18 months to go.
On a lighter note Ally Pally was great and an especial well done to the girls from EAST who produced a really wonderful display and to the delightful Cathy Unwin who makes everyone feel so welcome on the IFA stand. I'll post a couple of pics tomorrow as I am now off for some serious chocolate therapy before I do the ironing.
Posted by chrissythreads at 11:21 6 comments: 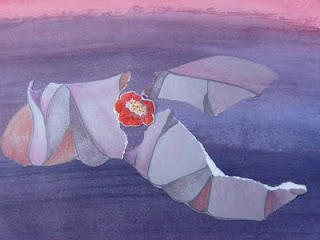 Labels: shattered
I'm so tired I am almost falling asleep at the computer but if I don't blog now nothing will happen until next week at the earliest -so here goes, short and sweet.
I'm so busy with both modules at the moment that I feel I only just about have my head above water. Two days ago one tutor said she wanted to see all my sketchbook up until now for an interim assessment which meant tidying everything up so it was presentable and getting it off to Derbyshire (which is a bit worrying with this postal strike business as all my ideas and work is in it). Then the other tutor wants me to meet up with her in London next week for the same purpose which means time out from studying to get up there and making sure that I have something substantial to take with me.
On top of this I have all the usual household problems/work to contend with and the fact that my mother-in-laws dementia has now reached crisis point and we are just hoping that the doctor will do something tomorrow as I am not sure how much longer my father-in-law can cope.
On the plus side we had our second Aqua 8 meeting on Monday. There is a lot of enthusiasm in the group and I think it could really go somewhere, I just need to summon enough energy to really engage with it all. And, all being well, I get to go to Ally Pally on Sunday for some serious Textile therapy.
I hope this entry makes sense as my brain has now completely turned to mush and I am going to bed. Night,night.
Posted by chrissythreads at 14:29 1 comment: