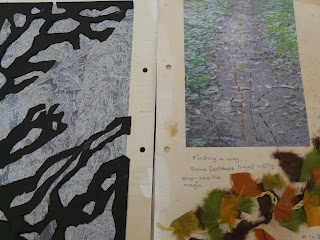 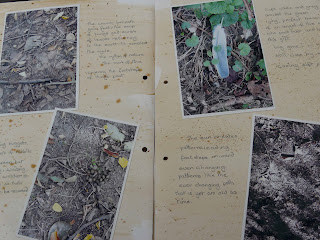 I spent the week trying to focus an exactly what I was trying to portray and decided the best way to do it was to keep a journal/sketchbook of my thoughts during my visits to the wood.This has proved extremely valuable as it has allowed me to really engage with the thought process not just with the technical aspects. I have also started to make tiny, quick stitch sketches of sounds, feelings and images from the woods. This is easier said than done as the weather has changed and I keep getting rained on whilst trying to do it so some of them are started in the woods,rapidly packed away and completed at home. Also the Dogs tend to think they might be edible and are quite disgusted when they find they don't taste that good.
They do have a fresh quality though and are leading to think of how I can incorporate this into the work. I also want to include some of my thoughts so some deconstructed text might be added. We shall see.
Induction day came and went. I'm not sorry its my last as the relatively short journey ( should be about an hour and a half) took nearly three hours owing to the usual weekend transport problems in London.
The day itself was extremely useful as we picked up some much needed information about various aspects of the final year which we hadn't been told (we seem to be just expected to know but I'm not psychic). I did feel that the tutor that led the day left me feeling a bit flattened. I am sure she knows her stuff but she didn't seem to like felt and thought I was trying to be a bit preachy in my subject matter. Why is there this down on felt as a material? So many people I come across on this course don't seem to like it. Well produced felt can be a thing of beauty and what I produce isn't what you would call traditional felt anyway. I hate all these trendy plastics and lack of well executed stitch but I believe in a person's right to make what they want.
Oh well-onward!
Posted by chrissythreads at 02:27 2 comments: 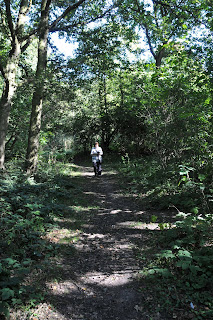 Posted by chrissythreads at 14:55 No comments:

It may have been a while since my last post - Kirsty has passed her driving test and started her nursing course, Martin has gone back to work and I have have been taking the first baby steps towards the work which will be the body of work for my degree show.
Throughout the last module I was experimenting with techniques and ideas to create the proposal that forms the basis for this work. It was rather confusing in a way as I felt that I didn't really know how far to take the work at that point and combined with the fact that because of various family disasters I missed out on my last tutorials I ended the module in a confused mess. However hopefully I have more of a definite idea of how to proceed.
The theme for my work will be 'The Way through the Woods'. I have a passion for the natural world especially that of the British Isles and I feel that many people have lost that connection with it that is so important. I know everyone is on about 'saving the environment' and I've done my bit of protesting with Greenpeace in days past but now I am more inclined to use my art to open peoples eyes and try to make them think again. I have found a Kipling poem called 'The Way Through The Woods' that seems to sum up that feeling that you can only reconnect with what is past if you really take time to look as 'only the keeper sees' and I intend to explore the little things that lie hidden or are captured out of the corner of your eye when you walk through a wood. To try and evoke this feeling of magical, spiritual connection that you can get if you take the time to walk a forgotten path through a wood. So we begin.
Posted by chrissythreads at 14:38 4 comments: