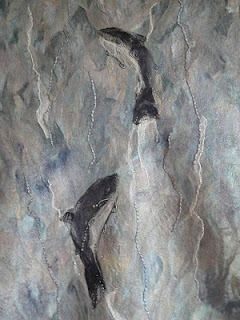 This period of downtime has been really useful for getting my head ready for the big push over the next year towards my grad. show. Several tutors had said to me that the dissertation might prove the most important part of the degree and as I'm not a great academic I just thought 'yeah,right!' However now I think they might be on to something.
Although I am still only in the middle as I have the final draft to produce next semester alongside the 1st personal specialism leading up to my final work(gulp!) for me it has crystallised not only what medium I want to pursue but also how I want to be defined in my practice. My dissertation title is 'Felt, Art or Craft?- an analytical study of felt in the creative sphere since 1945' so I have been using this medium to research present day attitudes to being an artist or being a craftsman and it has been a really enlightening and surprising journey. We are all so desperate to be seen as 'artists' mainly for the validation this title gives our work, however, in my study I've discovered that some of the most beautiful and thought provoking pieces that I have come across are by those describing themselves as either craftsmen or artist/craftsmen.

Generally though there still seems to be this feeling that those working in a region designated as craft as slightly inferior to the area of so called fine art. To me this seems utter rubbish and the research for this dissertation has made me decide that I will be really flattered to be designated a craftsman. I not very happy with the pretension and elitism of the fine art world (the Goldsmiths programme also re-enforced this feeling for me).

The really sad thing is that there has to be this labelling at all and its a modern western thing. So now I feel focused on what lies ahead- Here comes Chris an artist/craftsman working with felt.
Posted by chrissythreads at 03:54 4 comments: 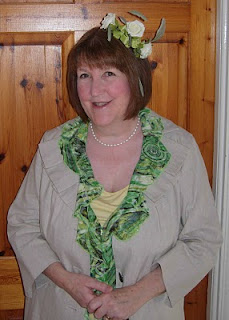 Labels: one glue gun, three roses and some feathers 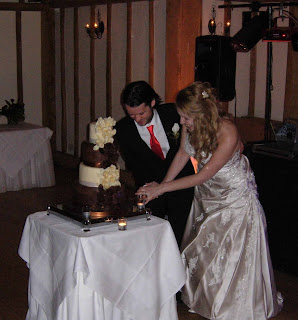 I had forgotten how good it was to have some time off. It seems so long since I have had a break from anything,esp. study, I had forgotten how important it is to re-charge the old batteries particularly creatively. Having a little leeway has meant that I am finding a little time to catch up with my own work. Material Girls have launched into their new project a bit quicker than normally as we have received an invite to exhibit in Jersey next year. It came as a complete surprise but apparently Pat Robson, the organiser of the event, spotted some of the photos that one of our members, Grace, had taken with her to show a friend when she attended the Textile Showcase a month or so ago and the next thing we know we had this invite. We will be exhibiting were Diane Bates did this year so we have some big shoes to fill but I know the girls will be able to do it.
I also had time to go to the wedding of one of Martin's cousins on Monday. They are a lovely couple and we had a great day. Do you like my Fascinator? its amazing what you can do with a gluegun and a few bits from Hobbycraft.
This was the first wedding we had attended in about 25 years and the first one ever for Kirsty. Martin's Cousin (Father of the Bride) is a priest so he took a step back for the day and the Bishop performed the ceremony in their church in Colchester. We were all a bit zonked though as Martin's dad had been carted off from St.Brides in Fleet Street (London) the night before having collapsed during his sidesman duties and we had spent a couple of hours trying to find what hospital he had been taken to. Fortunately he wasn't in any of them as having recovered (result of no tea, rushing all over Kensington during the afternoon and a hot church, not good for an 86 year old!) he had just asked the ambulance to drop him at the nearest tube station, which they did.
I've also had time to watch the documentary about Goldsmiths Art College. I spotted my tutor and it certainly explains a lot about my tutorials last semester. Something must be sinking in from the BA however as the painting I picked out as my favourite also proved to be the professor's, which I suppose is good!? If you haven't seen it and can get BBC IPlayer I would recommend it-lets say its interesting.
Next thing I could do with is a real go away somewhere holiday- but you can't have everything.
Posted by chrissythreads at 04:23 3 comments: 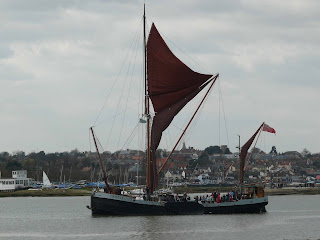 That was Easter wasn't it? I'm sure it was as I remember that somewhere there was chocolate and a really long traffic jam other than that it passed in a dissertation fueled haze. But I don't care because I've done it (not the whole thing you understand -I'm not that lucky) but I've just posted the first draft off to my tutor and I can't do anything else until I get her feedback. That won't happen until teaching restarts at the beginning of May which means I get 3 whole weeks off! Of course it all might be rubbish and its bound to need considerable reworking but today, this minute -I don't care because I'm free! Free to stitch, to walk the dogs without dragging them back too soon, free from 7 hours a day at the computer and waking up with a head going round with facts and quotes and things I've forgotten, free to get the house clean (OK you can't have everything. )So what shall I do first?- maybe I'll just sail away and dream and sleep.....
Posted by chrissythreads at 07:55 4 comments: