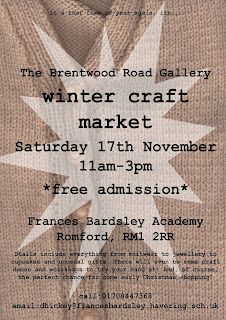 I really meant to post more regularly but when I looked I realised that not only had I missed nearly all of September but that October was rapidly disappearing. I have no excuse except that the last month or so has been unbelievably busy.
I have been wrapping up the last of the Bridging Waters events- exhibitions, sales, talks etc... (I give the last talk on Thursday) so the work can be packed and sent on its next journey to Canada.
Then there have been exhibitions to visit -in and out of London (I still have a whole list I need to get to before Christmas). The Knitting and Stitch show at Alexandra Palace - which was extremely enjoyable spending too much as usual, catching up with people but I was a bit underwhelmed by the exhibitions this year.There were several individual pieces in all of them that I admired but much that I had seen before and no single exhibition that made me go 'wow' as a whole. Still its all personal taste I suppose.
Then I have been getting to grips with the paperwork,rotas and practical side of organising the SDC shop in January. The Society of Designer Crafts Show will be at the Mall Galleries in London as normal in January  (11th-20th) and I can thoroughly recommend the show as a source of wonderful design and excellent skill. I can say this unbiased as although I am a licentiate I have nothing in the show as I haven't had time this year but I hope I will manage something for 2014. Instead I am one of the organisors of the shop within the show, which is certainly time consuming. Last year I helped which great fun but this year its up to us which is a bit different.
Having said that I am actually producing again now but haven't a lot to show you yet as its all work in progress- its a lot of work in progress, 6 large pieces for my exhibition in May, a body of work for Material Girls next show in 2014 and a separate body of work for the SDC.
Meanwhile -in my spare moments- I am rapidly producing my felty fishes and felty feathers for the Craft show above. If you are around do drop in.
Otherwise I will try and get back before the end of November .............