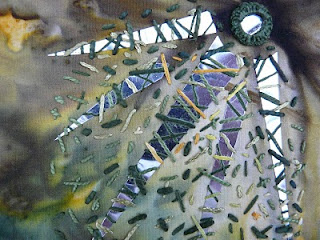 Sometimes I feel I am continually running up against a brick wall. Why oh why in this day and age is there such a demarcation between what people perceive as art and what they perceive as craft. I have had a couple of instances lately where when I say I am a textile artist people just look confused. If I say I produce work using fibre and stitch they ask if I make dresses or curtains, If I mention embroidery you can see their mind thinking cross stitch and their mouths saying 'isn't that rather old fashioned' and if I say I am an artist they immediately say -'oh do you use oils or watercolours?'
Its enough to drive someone insane! I even gave up the other day when at a bank filling in a form and they asked my occupation and when I told them they said 'I haven't got a box for that' so I ended up saying 'just tick the home maker one'. But I didn't want to- I've worked hard for my skill I would like it acknowledged.
I read an excellent article the other day by James hunting about the importance of achieving a balance between technique and concept- that they were both of equal and extreme importance and I so agree.Great 'Art', however conceptual, needs a grounding with good technique and all good 'Craft' stems from the ability to perfectly master a technique and combine it with a true concept. I wish we were still using the term artist craftsman it says so much more.
But how do we educate people - even those who are supposed to be part of this rather incestuous art world, to value textile art. There is a huge amount of unrecognized talent and creativity out there -Just in the last couple of days look at the blogs of people such as Brunel Broiderers and Judy Martin for inspiration, but do such as they ever appear 'in the nationals'
I suppose you could say its all about the creation not the recognition which is very true but we make work to be shared which usually involves exhibiting it and when the amount of affordable visual art spaces and galleries are getting fewer and fewer and the value of textiles still seems so underrated we desperately need a swing in opinion just to bring work to people who haven't experienced exactly what textile art is really about.
I don't know perhaps its just in my area-is it the same everywhere? the only thing I can do at the moment is go ARGHH!!!!!
Posted by chrissythreads at 03:27 5 comments: 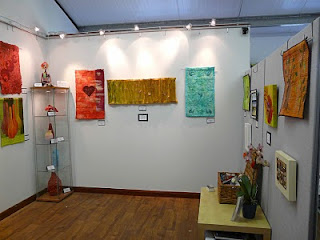 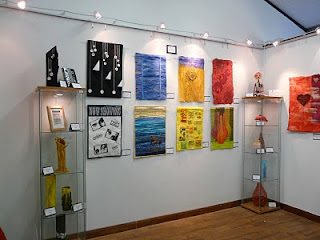 Posted by chrissythreads at 08:09 No comments:

A really busy week has seen me hanging the Primarily Colour exhibition at Craft Arena, giving a talk to the Chelmsford Branch of the Embroiderers Guild and taking a trip up to London to see the Treasures of Heaven exhibition at the British Museum before it closes.
It was interesting to see the 'colour' work hanging together at last - its previous outing hadbeen to the Jersey Textile Showcase in the Spring, where it was hung by the event curators. Unfortunately I was unable to get over there to see the results so this was the first time I was able to create the hang. The Craft Arena gallery in Billericay is the perfect space for this body of work being quite intimate and bright, I feel it shows the work off very well. Should you be in Essex in the next couple of weeks do visit as there are lots of things to do at the Barleylands Craft Village and a nice cafe as well as enjoying our work.
I hope the talk to the EG went well- I always find it difficult to judge with one eye on the clock and another trying to remember what you want to say and praying that it all makes sense. Talks aren't really my thing -I much prefer direct teaching.
Finally the trip up to London was well worth the effort. I had some business to attend to with a colleague which may prove extremely interesting and the exhibition was beautiful. You came out with an extraordinary sense of peace (I also kept smelling incense which my friend said she didn't so I presume this was psychological) probably being in the company of so many sacred relics. I noticed that there is shortly to be a Grayson Perry exhibition there so I feel another trip coming on. Meanwhile I must get back to actually creating - the deadline for the Bridging Waters exhibition looms ever closer.
Posted by chrissythreads at 07:53 2 comments: 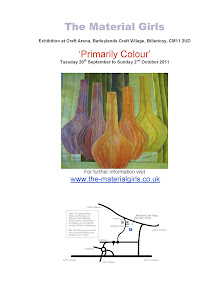 Posted by chrissythreads at 10:48 No comments:

At last I feel ready to start working again after feeling rather flat post degree which is a good job as its going to be a busy few months ahead.
Monday week will see me hanging Material Girls 'Primarily Colour' exhibition at Barleylands,Essex whilst on the same day in the evening I am giving a talk to the Chelmsford Branch of the Embroiderers' Guild (I always seem to end up double booking!)
The exhibition with the Canadian group Articulation is rapidly approaching and I have several other things in the pipeline (but more on those later). Just one problem I haven't been able to post on this blog since I have my new computer but with a tweak I am hoping this is going work- here we go again a new beginning.
Posted by chrissythreads at 10:37 1 comment: