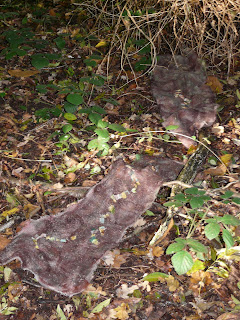 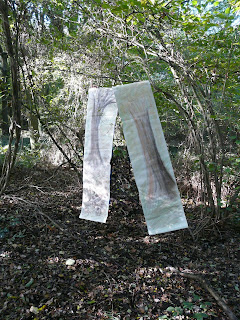 Posted by chrissythreads at 05:32 2 comments:

Labels: work in the woods 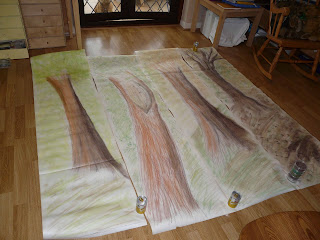 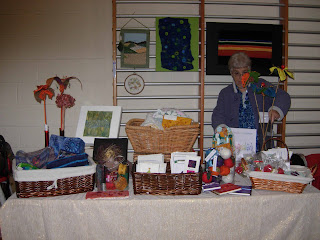 Posted by chrissythreads at 05:29 No comments:

I feel like the white rabbit in Alice in Wonderland at the moment- you know that bit in the film where he says/sings
"I'm late, I'm late for a very important date,
no time to say hello, goodbye
I'm late,I'm late, I'm late"
The last couple of weeks have been beyond hectic and I felt like I've been rushing around in ever decreasing circles slowly disappearing (like the Cheshire Cat but without the grin). Anyhow enough to say that I am now totally going to be focusing on the degree module as I have to start getting work ready for a meeting with the external examiner, Anthea Godfrey, on the 14th December. Sounds like a long time but not when you consider that I have to complete 3-4 extremely refined samples to demonstrate what the final pieces might look like by then and I have only one completed.
I have decided on 4 panels each approx.2ftx6ft to depict the woods during various seasons plus 15ft of pathway to depict the journey. All the fabric has to be made from scratch using the embellisher and then embroidered subtly just to highlight each of the magical snapshots.
I haven't even started to experiment with how to produce the desired effect with the woodland panels yet- that's next week- but I have devised a way to create the pathway and embroider the text from my journal of thoughts that I have made on my various walks in the wood. The tricky bit was getting the balance right so you can just glimpse the text if you look closely but, like thoughts, it also drifts away and disappears into the path, becoming part of it.
The photos I am posting are of the early samples placed back in the woodland but I have moved on from these. The paper mock ups are to give an idea and from a pattern for the completed panels but these of course will be much darker in colour.
Besides that I had to organise (and produce work for ) a craft market yesterday. We (Material Girls) only undertook this as a way to support the Visual Arts Centre where we exhibit as they have been running a craft promotion month alongside the Crafts Council and ETSY. Although we spent most of the time promoting the EG,ERTF ,JCS and Textiles in general we also made a few pennies.
Oh well I hear a hungry family calling -back down the rabbit hole!
Posted by chrissythreads at 05:10 1 comment: 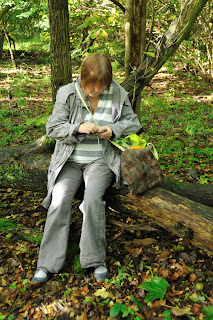 Posted by chrissythreads at 08:38 No comments: 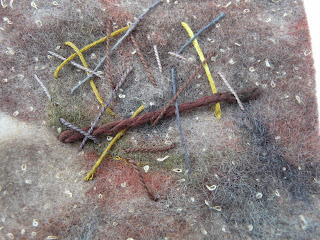 Posted by chrissythreads at 08:36 No comments:

I can't believe where the time is going but it has been a busy couple of weeks. I've been progressing the work forward and think I pretty much know how I want to portray my concept. I've been doing a lot of stitching and trying to decide exactly how to portray the broken thoughts that will form part of 'the path'. Now I am in the process of creating a full size paper mock up to see if it will actually work so the house is full of 6ft lengths of paper covered in paint and the cats are endanger of having their fur dyed green as they keep trying to sit on them. I think once I've completed these and actually put them up somewhere I will have a much better idea if the piece will work.
Other than that I have the Material Girls completing their work for the Jersey Showcase and we have 'kick started' our joint exhibition with Canada's Articulation group. This should be an exciting project with our joint work being shown both in the UK and then in Canada. The gallery we use is particularly excited about this idea and hopefully when the exhibitions run in 2012 and 2013 it will put a whole new slant on international textile co-operation (more on that as things progress). I have even been teaching again- not children but their teachers- it was a bit daunting as I have been out of the loop for quite a while now but its a bit like riding a bike it soon comes back to you.
Sunday was time for retail therapy as I visited Ally Pally . I did a short stint stewarding on the ERTF stand which probably saved me a few pounds but I still spent far too much- you now you're in trouble when the traders know who you are you even open your mouth!
Posted by chrissythreads at 07:21 2 comments: