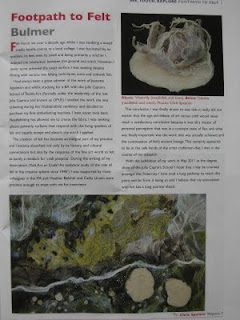 An End- A Beginning?

What a week! after slowly settling back into the 'normality' of post degree life all -of a sudden the fact that JC had ceased to trade drops like a lead weight!

How did it feel to the new graduate group? Initial relief that we had 'made it under the wire' so to speak, incredible sadness for our fellow students and friends who were still treading the path, almost a survivors gulit. Then the nasty realisation that, although we had 'graduated' and been informed of our awards informally we had nothing formal in writing. The next 24 hours and dozens of e-mails to both JC and Middlesex Uni. finally merited a reply- our degrees were definitely safe, Middlesex were on the case.

People keep saying to me 'how lucky it was' that I decided to condense my degree, to double up on my workload so I could graduate a year early. It was - but I always had a nagging feeling that the sooner I got out the better, even as we graduated there was an atmosphere in the air that all was not perhaps as it should be. I made no secret of this feeling but I did think it would last at least another year and now I feel so sorry for the others and guilty that just for once it isn't me up to my neck in it.

Then over the last few days parts of my 'new life' started happening - I had a small article about me published in Felt Matters, I hosted a really good afternoon for the ERTF (I'm the new Essex Rep. now) where we have managed to put in place all sorts of new, exciting ideas about regular events we are going to initiate for our area and then news that I had been selected as a Licentiate of the Society of Designer Craftsmen came through the door, a body I've hungered to belong to for a long time. Its a funny old world isn't it.
Posted by chrissythreads at 03:54 7 comments: