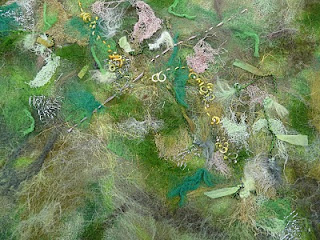 Posted by chrissythreads at 03:54 No comments:

Its been a bit of a nightmare this last week or so. Firstly I found out that my tutor for Personal Specialism (one of the modules I'm doing this semester) wanted all the work into her by 26th at the very latest. I'd been working to a timescale which concluded a couple of weeks later than this so needless to say I've been running around like a headless chicken trying to pull everything together so it can get posted by the middle of this week- with luck I'll get there. The dissertation seems (and I say seems) to be running more smoothly and is on target to be bound and assessed.
Then in the middle of this we had a family crisis- My 18 year daughter who flew out for her first holiday on her own (first time she's even flown) contacted us in tears needing to come home. Kirsty doesn't panic or even get really upset but she was really distraught. I spoke to one of the girls she was with and she concurred so we had to set the wheels in motion. The worse thing was her phone hadn't switched over to international and after I spoke to her and she left the hotel (I use the word very loosely) in Magaluf we were out of contact with her for 18 hours not even knowing if she'd made it all on her own to the airport. Delayed flights and a lot of worries later she arrived at Stanstead looking like death warmed up but fortunately all in one piece. I won't go into what happened but it was all an extremely unpleasant experience. The group of girls she went with all decided to stay so I just hope they are OK. I am just amazed she managed to get herself back - it may seem like a little thing, it wasn't 'up the amazon' after all, but to do it all alone when you've only made your way around London or to the odd Uni. interview on your own before and had an unpleasant experience thrown in as well takes some guts.
In fact things have been a bit of a strain generally lately so I have decided to take a blogging break for the whole of August. Hopefully I'll be back in September but I have decided that the blog from themnwill be totally devoted to the run up to my degree show.
A good summer to everyone in blogland and I'll be back when I have recharged my batteries.
Posted by chrissythreads at 03:34 5 comments: 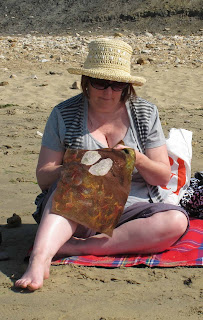 Labels: sea and stitch, sun
Well I'm back! Lyme and the weather this year was just spectacular, so hot some days you couldn't even walk on the sand. As the daughter wasn't with us we indulged ourselves in all the things we usually get moaned at for doing. Walks around gardens, hikes through the countryside, rambles around ancient castles and I even got to stitch on the beach!!!! I took lots of pictures suitable to be made into textiles once this degree is over and just chilled out.
But now we're back.... need I say more. The house is still standing ( although I am fishing vodka bottles out of strange places "of course there were no parties mum") and the cats aren't talking to the daughter although have decided to talk to us.
So its back to work - get the dissertation bound ready for marking and the practical work ready for assessment. I met up with a group of friends who are also colleagues to visit the JC graduate show before I went away so at least I could get some idea for how to approach it next year. It was a good day- apparently John Torode showed us to our table at lunch but I was talking so much I didn't notice - oops.
Posted by chrissythreads at 08:04 3 comments: